Sheep Breeds And Their Characteristics

Find out about different sheep breeds and their characteristics in our guide below...

The Merino sheep and its crossbreeds are the basis of southern hemisphere fine wool production. The Merino originated in Spain. The breed grows well in arid conditions as found in Australia, South Africa and parts of New Zealand.

The Merino of Australia is the backbone of the largest wool producing country in the world and this breed is the only one grown purely for its wool. The Merino ranges in micron from superfine, 12-13microns to coarse, 25-26microns, the finest grown in Australia. The bulk of Merino wool production is 20-23microns. Staple length varies from 30-90mm. This breed is found in many countries of the world and the quality of fleece produced varies greatly, depending on growing conditions and animal husbandry.

There is more than one breed of sheep in Norway. The oldest is a lustre wool breed known as Gammel Norsk Spelsau (translated as Old Norwegian Spelsau). The Spelsau is a breed with coarse outer hair and shorter, finer second growth. It is related to the Gotland and also the breeds of sheep found in Iceland and Faeroe.

However, the main breed in Norway is now a crossbred sheep, produced by crossing the Cheviot, which was imported from the UK in the 1800’s, and the Dala and Steigar breeds, native to Norway. The wool produced from the first clip is shorn in summer. It is approx. 29-36microns and 80-120mm long, which makes it suitable for combing. This wool is suitable for felting, hand knitting yarns and woven garments, where good resilience is required.

The Shetland is the smallest of the British breeds found mainly on the Shetland Islands. It is believed to be of Scandinavian origin. The breed produces wool in several shades, including white, brown (moorit), grey and black. The wool is fine, soft and silky to the touch with a good, bulky down characteristic.

Production is fairly small and much of the clip is consumed by the islanders themselves. The wool varies in quality from approximately 28-33microns and fibre length from 50-120mm. The name ‘Shetland’ has become generic. Much of the knitwear available in the general marketplace is not produced from Shetland wool at all, but from wools of other origins, which have a similar quality and appearance.

The origin of the Jacob or Spanish sheep is not known with any certainty. The first flocks in the UK were based on stock imported from the former Cape Colony, having been established there by settlers from Spain & Portugal. The fleece is mottled/patchy in appearance with the dark patches becoming lighter as the sheep matures. This breed is in demand for handmade textiles as the range of colours produced are more varied than other breeds. The quality of the fibre ranges from approx. 32-40microns and length, 80- 150mm.

Blue-faced Leicester wool is classed as long-wool with lustre. The breed evolved during the 19th Century and originally came from the Tyne and Wear valleys, and hills of east Cumbria. It was sometimes referred to as ‘Hexham Leicester’.

The wool is fine and dense with a good lustre and is long. Therefore, it is well suited to combing. The sheep produces a fairly small weight of fleece for its size and the fleece has been highly prized in recent years for its likeness to mohair, for production of attractive lustrous yarns with good resilience. The fleece is available in white and natural brown hue.

The Masham, pronounced massam, is a cross of Teeswater or Wensleydale ram with Dalesbred or Swaledale ewes. The fleece is very long and lustrous and the breed is found mainly in the north of England. The fleece is suited to combing due to its length and is used in speciality products due to its limited availability. The fineness varies from approx. 38- 44microns and length approx. 150-380mm.

This UK breed is classified as short-wool and down. It is the most widely distributed breed of all the British breeds. Its dense fleece is suited to knitwear and any other application where a good bulk is required. It is a cross-breed of Norfolk and Southdown and has become a breed in its own right. The wool of the Norfolk was used in the original East Anglian cloths, which were made in the medieval times, which is where many of the cloths were produced at that time.

This is the only purely black breed of sheep to be found in the UK. Its fleece is fine enough to be used in speciality products and is long enough to be combed. The breed is classified as mountain and hill and is found throughout the whole of the UK but originated in the Welsh mountains and uplands. The fibre fineness is approx. 30-40microns and the length, 80-100mm. It is quite bulky but carries more dead hairs (kemps) than other breeds. There is sufficient quantity of this wool to be used commercially.

The Gotland is a native breed of Sweden. It is one of the oldest sheep breeds. The breed has been exported and small flocks can be found in other countries, including Norway, Denmark, the UK and USA. It is native to the province of Gotland and is a sheep from open pasture.

The breed is now predominantly medium grey colour and is commonly known as the Swedish Pelt Sheep. Lambs-wool of this breed is in demand for its softness and lustre, being long enough to be combed. The older sheep-wool is a little too coarse for use in garments and not so lustrous. The fleece is also quite curly and similar in some ways to mohair. The fibre fineness ranges from 30- 44microns with the lambs-wool at the finer end. The length is approx. 80-150mm.

This UK breed is classified as a long-wool and lustre. Found mainly in the north of England. It is a hornless sheep with a blue face. It has a fairly curly and very long fleece. It is often used for blending with finer but shorter stapled wools, where a strong yarn is required. The wool is approx. 40-50microns and 200- 300mm long.

This UK breed is classified as long-wool and lustre and is found in Northern England. When crossed with other hill breeds, such as the Swaledale, it produces a halfbred sheep called Teeswater half-bred, more commonly known as the Masham. The sheep produces a long curly and lustrous fleece, a characteristic which is passed onto the Masham. The wool is approx. 40-60microns with a staple length approx. 150-300mm.

This is a New Zealand sheep breed, produced by crossing merino sheep with Lincoln and Leicester to produce a sheep with sound, long staple in the crossbreed range. The breed is now farmed internationally, including Australia and the USA. The fleece is a bright white with good crimp and soft handle and is very even. The wool produced is approx. 25-30microns and staple length, 80-120mm.

This UK breed is classified as mountain and hill. It is found in the uplands of the Scottish borders, Northumberland, South Wales, Canada, Scandinavia, USA, South Africa and New Zealand. The fleece varies in quality from fine to coarse and has many applications, making this wool very versatile. It is of a good, white colour overall. It is not too crimpy and is quite resilient, which makes the wool suitable for filling purposes, where a good white background is required.

The wool found its popularity in the Cheviot suitings/fabrics, typical of Scottish border town production and has found its way into blankets, rugs and hosiery articles. The fineness is approx. 30-40microns and length, 80-100mm.

The term, Falkland wool, refers to wool grown only on the Falkland Islands and not in any other location. The wool clip from these islands is a very good white and is grown from Merino and Polwarth breeds. The majority of the wool produced emanates from the Polwarth. The clip is relatively small compared to other world clips and was, until recently sold predominantly through the UK.

Fineness ranges from 18/19microns to 32/33microns with the bulk of the wool being in the 27- 30microns category. The length is 80-100mm with the fleece showing good bulkiness and soft handle. In some ways, and for certain applications, it can be considered better than Australian grown wool, especially for knitting yarn, where good bulk is required.

This UK breed is classified as mountain and hill and is found predominantly in the northern counties of England and the Pennine hills. The fleece varies in colour from white to grey, being a similar breed in appearance to the Blackface sheep. So, the overall appearance is light grey. The wool is predominantly used in carpet yarns and rug yarns due to its excellent resilience and hardwearing properties. Some wool finds its use in hand-knitting yarns. The fineness is approx. 40-60microns and length, 100-200mm

Devon is predominantly classified as long-wool and lustre. However there is also a production of Devon close-wool, which is finer and shorter and does not have the same lustre. The wool fleece is one of the heaviest clips in the UK with fleeces weighing up to 10kgs. It is good felting wool and with the added lustre and resilience is ideally suited for carpet manufacture. The lambs from this breed are excellent for knitwear and woven fabrics. The fineness is approx. 40-60microns and length, 200-250mm.

This is a Dutch breed, which is also found in other countries, including the UK. It is an ideal sheep for crossbreeding. The sheep produces a good dense fleece of medium quality, which is suitable for fine carpet yarns, hosiery and knitwear, at the coarser count end. The wool is predominantly white, with fineness approx. 32-40microns and length, 80- 150mm. 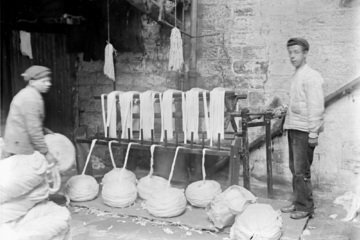 The history of textiles is long and eventful, steeped in tradition and intrinsically woven into the heritage of West Yorkshire.